What would it take to get “small box” stores to actually work?

If you didn’t see my earlier post regarding the potential for using just-in-time techniques to reduce store footprint, here’s an excerpt that I’ve shared elsewhere:

So in our just in time model, the chicken and Coke would be placed in the selling area at 3:00 on Friday afternoon, and would be sold out by 8:00 Friday evening. Walmart could then use the space to sell stuff that people would buy late on Friday night. (Use your imagination.) Then, probably around noon on Saturday, they’d start putting the beer in the selling space. The same space would be reused over and over again to sell different stuff.

The stores need a much smaller footprint, due to continuous reuse and repurposing of the space within the stores.

I admitted that we probably weren’t ready for this today, since the economics of grocery delivery don’t support the frequent trips to the store that would be required.

And Allen Firstenberg, both at the original post and at a Google Plus reshare, noted that a somewhat similar real-life example is decidedly not working.

The real life example is a company called Whole Foods. Perhaps you’ve heard of it. Before the Amazon acquisition, Whole Foods set out to reduce its back-of-store inventory. I didn’t account for this (which I should have, considering my familiarity with the Sears/Kmart allegations), but the Whole Foods theory was that if just-in-time practices were introduced, then warehouse deliveries could go straight to shelves, and not have to be held in freezers or bins in the back of the store. As Business Insider notes, the goal was to

Of course, for the system to work properly, two things have to happen.

First, Whole Foods needs to be able to anticipate store demand. In my extremely simplified example in my prior post, I made some assumptions about when people would buy chicken and Coca Cola, and when they would buy beer. Whole Foods – especially since it’s now part of Amazon – would presumably have access to much better data.

Second, the delivery system needs to work. If the demand system anticipates a surge of product sales on Friday at 4pm, then that truck had better get to the store before that time.

In the case of Whole Foods, both assumptions failed.

…any unexpected increase in shopper demand or a product-shipment delay can result in out-of-stock items across every department, multiple employees said.

“If a truck breaks down and you don’t get a delivery, then you have empty shelves,” an assistant manager of a Chicago-area Whole Foods said.

An employee of a Texas Whole Foods store told Business Insider that stocking issues were “horrible” over the holidays and that the produce department “looked embarrassing.”

“I get constant and consistent complaints from customers for continuously being out of staple [products],” the Sacramento employee said. “It’s frustrating as an employee and also as a shopper.”

And if you go to the Business Insider post, you can see a ton of pictures of empty or near-empty Whole Foods shelves, many taken by angry customers.

But while Business Insider spent a lot of time diagnosing the problem, it didn’t suggest a solution. Even the article admits that the pre-JIT system led to overstocks in the back-of-store inventory, and spoilage of some of the food back there.

Hopefully Whole Foods and its corporate overlords are analyzing the supply issues, determining what is wrong with the ordering model, determining why some deliveries are delayed, and coming up with solutions to fix the whole thing.

What would it take to promote “small box” stores? (Just in time store reconfiguration)

I shared a pair of posts on two of my other blogs, Empoprise-BI and Empoprise-IE, regarding the latest round of Sears/Kmart store closures. In both posts, I shared a picture of a nearly empty Kmart that I had previously taken (this Kmart is one of the stores slated for closure). 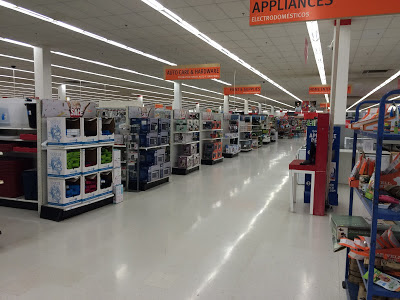 Based upon this picture, and other pictures I had taken, I shared a throwaway observation:

I’m beginning to suspect that the members’ preferences for Sears’ physical store footprint is around zero.

Leave it to Jim Ulvog (a CPA by profession) to make a serious point regarding this.

Wonder what the compound shrinkage rate is. That would be something like a burn rate metric for physical capacity instead of cash. You comment that customer “preferences for Sears’ physical store footprint is around zero” is seems to be near correct.

But Ulvog’s observations did get me thinking about the overall size of stores.

Throughout the last 100 years, there has been a general move toward bigger and bigger stores. I grew up near an old-fashioned A&P store that only had four aisles. Today I live within driving distance of Super WalMarts, Super Targets, Costcos, Sam’s Clubs, and IKEAs.

These stores stock a lot of stuff meeting the needs of all of the people that flock to them. But when you think about it, a lot of stuff just sits there.

I’ll give you an example. My local Walmart offers a feature that allows me to place a grocery order via the Walmart app, and then go to the Walmart later in the day and pick it up.

Not the day before, or the week before.

So theoretically, if Walmart knows that I won’t need that milk until 11:00, there’s no reason for it to be in the store at 8:00, taking up space. (Assume for the moment that data mining allows Walmart to predict the exact times when customers will buy stuff.) So Walmart could deliver the milk to the store at 10:00, and it would still be available for me to buy.

Presently the economics of retail does not support on-the-hour deliveries of goods from a warehouse to a retail store. But perhaps in the future grocery industry – or in some other industry – some of the “just in time” concepts that have been used in manufacturing could be applied to retailing.

Here’s a simplified example. Because it cares about us, Walmart promotes a standard dinner consisting of a hot roasted chicken and Coca-Cola. You obviously don’t need to buy such a dinner at 9:00 on Monday morning. In fact, for purposes of this example, let’s assume that you’d only buy it on weekday afternoons.

So in our just in time model, the chicken and Coke would be placed in the selling area at 3:00 on Friday afternoon, and would be sold out by 8:00 Friday evening. Walmart could then use the space to sell stuff that people would buy late on Friday night. (Use your imagination.) Then, probably around noon on Saturday, they’d start putting the beer in the selling space. The same space would be reused over and over again to sell different stuff.

The stores need a much smaller footprint, due to continuous reuse and repurposing of the space within the stores.

Now we’re some way away from this today – as I noted, economics don’t currently support such frequent trips between the warehouse and the grocery store – but perhaps we’ll start to see this in some other industries. We already have pop-up stores, food trucks, and other selling avenues that occupy a small amount of physical space for a temporary period.

If a selling location can reconfigure itself on an hourly basis to meet the anticipated needs of the moment, we’ll need a lot less space devoted to selling.

And then shopping center owners would be faced with even more empty store space, and would have a REAL problem.

Driving is not a crime. (Yet.)

I am writing this on January 1, 2018 – which happens to be the day that recreational marijuana is being legalized in the state of California. Whatever you may think of this particular move, it’s worthwhile to note that at the same time that people are going to be lighting up, the state of California is getting people to NOT light up. And because government seeks to protect us from things that can harm us, there will be a point in which the recent move to legalize marijuana will be reversed.

But that’s not what I want to talk about.

I want to talk about making driving illegal.

Because of the recent reorganization of my employer, I’m looking a little more at driver’s licenses these days. And, of course, I’ve been looking at driverless cars in Tymshft for years.

So I was very interested in a recent National Review article that talked about a “war on driving.” And unlike the war on Christmas, the National Review writer proposes a Constitutional amendment to protect our way of life.

But why would anyone engage in a so-called war on driving?

While autonomous cars seem like a disaster waiting to happen, the truth is that human drivers are very accident-prone. Regardless of how you define the data measurement, tens of thousands of people die in automobile accidents every year. And why?

[D]rivers are concerned about safety. Some 83% of respondents said driving is a safety concern. But that hasn’t stopped many of them from speeding, texting, or driving while impaired by alcohol, prescription medication, or marijuana.

Whoops – there’s marijuana again. But the point being made is that autonomous driving algorithms, if designed correctly, will actually be safer than human drivers.

So what does this mean for the future? Back to National Review.

At some point in the future, be it years, decades, or a century hence, the federal government will seek to ban driving.

This, I’m afraid, is an inevitability. It is inexorably heading our way. The dot sits now on the horizon. As is common, the measure will be sold in the name of public health. “Now that robots can do the work,” its bloodless advocates will explain, “there’s no need for human involvement.” And from then: On, the snowball will roll….

Our debate will rest largely upon charts. The American Medical Association will find “no compelling reason to permit the citizenry to drive,” and Vox will quote it daily. Concurring in this assessment will be The New England Journal of Medicine, the Center for American Progress, and the newly rechristened Mothers against Dangerous Driving, for which outfits “dangerous” will have become a lazily supplied synonym for “human.” Atop this endless statistical beat will be a steady stream of mawkish anecdotes. “Joey was just 17.” “Sarah had three kids.” “Not a day goes by in which . . . ”

Those who are familiar with National Review will realize that it opposes such measures as a threat to liberty and privacy, both from public and private entities. (Do you want the California Department of Public Health or Google or Tesla knowing where you are going…and trying to redirect you somewhere else?)

After all, how can you peaceably assemble if you can’t get yourself to the place of peaceable assembly?