What I said about the communications revolution…in 1991

Many years ago, when I was taking MBA courses at Cal State Fullerton, I wrote a paper for one of my classes. Some of the content was derived from research that I performed at the time, while other content came from books that I had lying around my apartment, such as the autobiographies of Jimmy Carter and John Sculley.

I guess the paper must have been OK, because after I wrote it, the professor, Brian Kleiner, approached me and said that he could get it published.

Why not? I thought.

So in 1991, an English journal called Industrial Management & Data Systems published a paper by John E. Bredehoft and Brian Kleiner entitled “Communications Revolution and its Impact on Managing Organisations Effectively.”

I’ve referred to this paper at times. You can find it on my LinkedIn profile. I’ve referred to it on Google Plus – twice. And I just mentioned it in an Empoprise-BI post.

But I haven’t actually READ the paper in decades. Oh, I was curious about reading it, but not thirty-two dollar curious.

But then I found a free copy of the article by searching. You can bet I downloaded it. 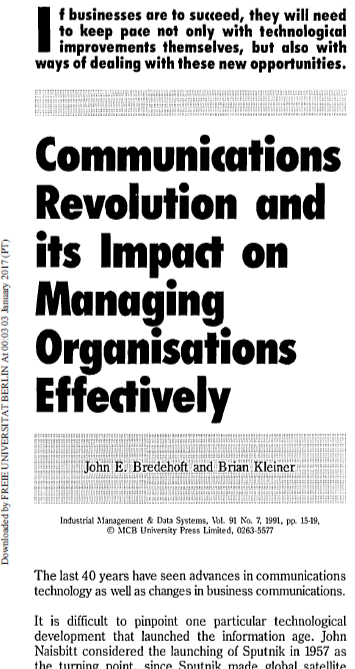 And now I’m looking at the paper, curious about what I thought about the communications revolution in 1991 – and how my thoughts relate to the present-day 2017 communications climate.

Now bear in mind that I wrote my original class paper over a quarter century ago, and I don’t really remember the details of its creation. And Kleiner obviously had a hand in the final printed article.

If anything, “distance” has been removed as a variable. After I got my MBA, I was tangentially involved in discussions regarding how electronic data interchange (EDI) could send data from Walmart’s headquarters in Arkansas to my then-employer in Monterey Park, California. Today, the data for those transactions could be stored in Colorado, or in Europe, or in India, making concerns about distance minimal.

And volume? Um, kids, back when I was an MBA student in 1991, I couldn’t whip out my mobile phone and watch a movie. Come to think of it, I didn’t even have a mobile phone in 1991.

Needless to say, the passage of time has resulted in some amusement while re-reading the article today. Back in 1991, the editors of Industrial Management & Data Systems saw fit to call out this profound statement:

The quote itself comes from a paragraph in which we assert that the technologies could allow people in different locations to work together to solve a problem. We even quoted from an article in Rural Sociology in which Don Dillman discussed “geographically unbounded interactions” and wondered how they would affect rural life.

And, I’m sorry to say, there is one instance in which we got it plain wrong. I’ll take the blame for this one; I doubt Kleiner originated this idea.

Because of the technology advances, we can gather much more accurate information than we could previously.

Yes, I wrote that.

Boy, was I stupid.

I made the assumption that the scanners were providing correct information, and that there were no malfunctions in the scanners or in the systems tabulating the data from the scanners. More importantly, if you’ve been paying attention to the recent news, I also made the assumption that any reports of this data were completely accurate, and that no one had falsified any of the data. To be fair, this paper was published several years before Enron’s collapse, and a couple of decades before automobile companies were caught falsifying emission data.

Now I just have to find an online source for the other publication that I cited on LinkedIn – my undergraduate thesis on the Land and Water Conservation Fund. That’ll be a hoot, even if it is written in American rather than English.