The types of folks who read Jim Ulvog’s Nonprofit Update have had to deal with some changes over the years.

Back when Jim (and I) were growing up, nonprofit organizations of all types could depend upon receiving funds from something called “spare change.” Kids would carry UNICEF boxes around. The Girl Scouts could count on you having a little bit of money to buy a box of cookies. And the offering plate could take a coin or a bill or two.

But even back in those days, we had to deal with Karl Malden urging us, “Don’t carry cash!” 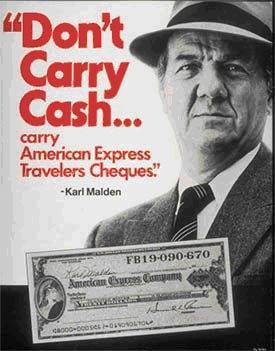 Now the specific product that he was hawking – American Express Travelers Cheques – has (almost) gone the way of the dodo bird, but more and more of us are using the fantastic plastic (or the smartphone) to fund our purchases, and therefore might not have the spare change to give to the Girl Scouts or whoever.

PYMNTS recently talked about a company called DipJar that provides a solution to this. DipJar has been around for a while, though – TechCrunch wrote about it in 2014. While the idea originated as a way to pay tips to workers by deducting a predetermined amount from a credit card, the idea has extended to the nonprofit realm. PYMNTS:

[T]he payment solution has enabled many charities to accept credit cards, including the Children’s Miracle Network Hospital, which uses DipJar in both a retail setting to collect money for themselves and to collect money at events, and the Salvation Army, which uses branded DipJars for various campaigns.

The reliance on a single donation amount contributes to ease of use. And while there are other solutions (such as SMS-based solutions) that allow the same thing, some people probably feel more comfortable using a physical card to make the donation.